Me and the French couch surfing guy agreed to meet for a game of squash. On the Sunday we were meant to be playing on, I opened the shutters in my kitchen and saw that it was raining heavily. The same as the last three days when school has been cancelled, a man had drowned and one of the landlady’s outside chairs had blown down the mountain, despite me putting a rock on it to keep it in place.

At 10am, an hour before we were going to meet, he sent me a text saying the river had burst its banks so we couldn’t get to the squash courts. I spent the rest of my day writing lesson plans for classes that would be cancelled and eyeing my cupboards nervously, aware that I was running out of supplies. I ate rice for dinner and drank my coffee black. 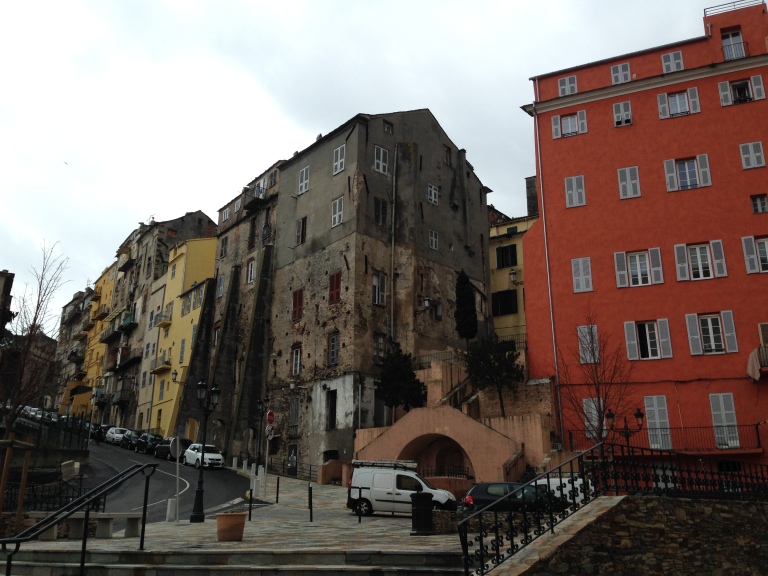 A week later he had gone to Marseille and I was on my way up to Bastia to spend a few days with a home friend who was visiting. She arrived on the Sunday so I spent the Saturday morning reading in cafes and later went to see ‘Un sac de billes’ at the cinema and cried on my own.

Her ferry from Marseille docked at 7am. When I left the airbnb at 6:40am, the sun was streaming through the streets, reflecting off the wet cobbles. Already people sat outside in the streets surrounding the market square, noisily chatting over espressos. The market was almost fully set up.

I reached the waterside and began to walk besides the ferry which was just turning into the port, when I heard someone shouting something. I realised he was shouting at me but I didn’t understand what he was saying. He was speaking Corsican, I thought.

I turned to look at him. « Je ne comprends pas » I said smiling.

He laughed crazily, uttered something incomprehensible and put his phone in front of his face as if he was filming me. Beside him, his friend tried to hold him back. He smelt of wine.

He had stopped so I began speed walking away towards the port. He called after me  but his friend told him to hush. He continued but by the time I crossed the overpass I could no longer hear him.

On the Monday we took the train to Ajaccio and stayed at another airbnb. The man who owned the place had Napoleon as his airbnb profile picture. When we arrived, it turned out he also had numerous statues and framed pictures of Napoleon displayed around his apartment, in addition to a large baroque style writing desk.  “I don’t normally leave the house during the day” he told us.

I took the bus back to my place on the Tuesday. It turned out to be still free. On the Sunday, I had arranged to play squash again with the French Couchsurfing guy. The squash court was in a small nondescript building on the side of the road, surrounded by woods. When we knocked on the door, an old lady appeared with a gigantic black dog and unlocked the door. We were the only people there. “Be careful not to hit him with the ball” the old woman said. We played for an hour and I lost every game. It was fun.

I had been giving the Spanish Couchsurfing guy informal English lessons for a few of weeks. I gave the first couple of lessons on week days because he had injured his wrist and couldn’t work so was free during the day. He was better now though and was usually working at the plant nursery on weekdays. We arranged to meet up on the Saturday morning at the supermarket. He needed a box for his bike he told me. I wasn’t sure why I had to come, unless we were doing the lesson after, but I had no plans and it was sunny.

When I arrived, he was bent down outside, putting three different locks on his bike. “I like to be careful” he said to me. He got up, we went inside the supermarket and he asked me how I was.

“Not bad not bad, what about you?”

“The reason I need a box is actually really bad” he said gravely.

He stopped and looked me in the eyes. “Well in fact on Wednesday afternoon I received a letter in the post saying they no longer needed me and I have three days left.”

As we went around Casino, he told me that the boss had sent him the letter in the post telling him he was no longer needed. The boss lived on the same site as him.

“He drove to La Poste to send it” he said. “It said I have to be out by Tuesday.”

I asked why and he said he didn’t know. “I don’t think I’ll ever know” he said.

Later, we cycled to the beach and ate sandwiches whilst looking out to the sea. The beach was piled high with smelly seaweed, which an information sign said was “not waste” but there “to protect the sand.” Three teenage boys pulled up on mopeds and one of them stood on the bank of sea weed and pissed a golden arc out to the sea. After, they played a game of ‘catch the rugby ball’ in front of us.

The night after we went to the French Couchsurfing guy’s house to play board games with him and another one of his friends who was also a Dad. He spent over an hour explaining the rules of the first game as I sipped flat Orangina and nibbled on soy nuts. Four hours later we decided to order pizza and afterwards we played a second game. The French Couchsurfing guy told us he had gone to a board game festival when he went to the continent for the weekend and met the creator of the board game we played. He discussed the different board game playing strategies with his friend and the Spanish Couchsurfing guy. The pizza was good. After seven hours, just before midnight, we left.

On Monday, I met the Spanish Couchsurfing guy in town for lunch. After, we went to the library where he printed his flight ticket off and I went to toilet. When I came out of the toilet, the librarian came over to the toilet door, closed it and gave me an icy stare. A sign on the door behind her said “Privé.” We walked into the old town and bumped into the town carnival, which consisted of primary school students walking down the streets dressed as princesses, cowboys and foxes. A small child approached me and threw glitter over my trainers. I looked down and realised it was a girl I tutor.

I said goodbye to the Spanish Couchsurfing guy and cycled back home. There were big dark clouds forming on the horizon and a chilly wind, but by the time I reached the top of the hill my coat was clinging to my body with sweat.

In other news, I have bought a water filtering shower head from Amazon and now take anti-histamines every day. My eczema, which had been rabid since I moved here in November, has much improved. So far.

This is a text widget. The Text Widget allows you to add text or HTML to your sidebar. You can use a text widget to display text, links, images, HTML, or a combination of these. Edit them in the Widget section of the Customizer.
Loading Comments...
%d bloggers like this: